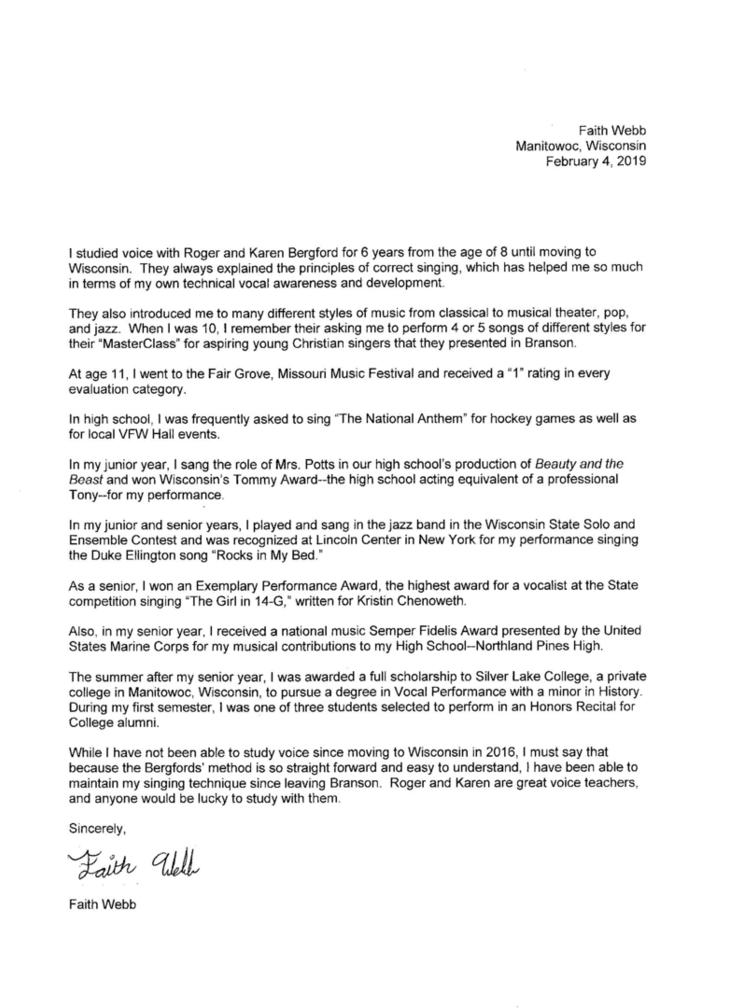 In 2012, I was involved in a head-on collision, resulting in injuries so serious that I had to re-learn how to walk, talk, swallow, chew, and sing.  Doctors later told me that the prognosis for 90% of people with injuries as severe as mine would either have died or have ended up in a vegetative state.

Before my accident, I had performed as a singer in theaters here in Branson.  The accident, however, dramatically affected my speech, causing me to speak more slowly and deliberately, and the therapy to regain my speech caused me to over-enunciate certain words, significantly impacting my verbal communication.

A friend introduced me to his voice teachers--Roger and Karen Bergford--and after a few months in their studio, I began to sing--and speak--in a much more relaxed, natural way, and coworkers have told me how much my speech has improved this past year.  This improvement has made a significant difference in my job performance where I interact with customers and supervise staff.

It has also carried over to my singing, giving it a more “conversational” quality.  Additionally, I have regained 90% of my vocal range and strength and am able to sing with far greater confidence, even in foreign languages, as I had previously.

One of the greatest outcomes of my vocal training with the Bergfords, however, has been the liberating self-confidence I’ve gained to continue moving forward with my life, despite a once life-threatening injury. 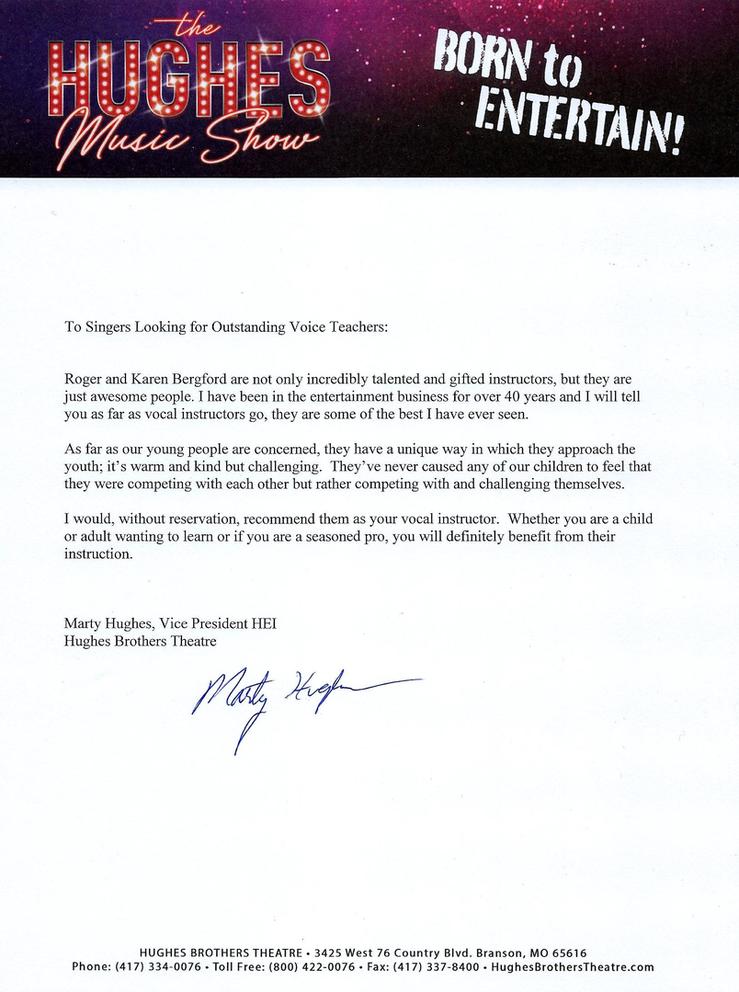 The Voices of Glory, students of Roger and Karen Bergford, were named Branson’s “Vocal Group of the Year” in 2017,
receiving both the prestigious Terry Award as well as the Branson Show Award. Eighteen-year-old Nadia took solo
honors as “Female Vocalist of the Year.” “Under the Bergford’s direction, our voices have grown incredibly,
and the techniques they have taught us have boosted our confidence both as vocalists and as entertainers.
Their teaching has truly put us on track to reach our full vocal potential.”
​
The Voices of Glory performed their 2018 “AYO” show from March through October at the Andy Williams
Performing Arts Center & Theatre, joining the Lennon Sisters and Jimmy Osmond
in the “Ozark Mountain Christmas Show” in November and December.

Thanks for blessing so many with your knowledge of vocal production!
You are a huge asset to Branson!​ 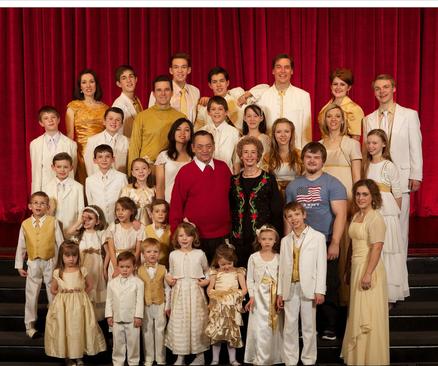 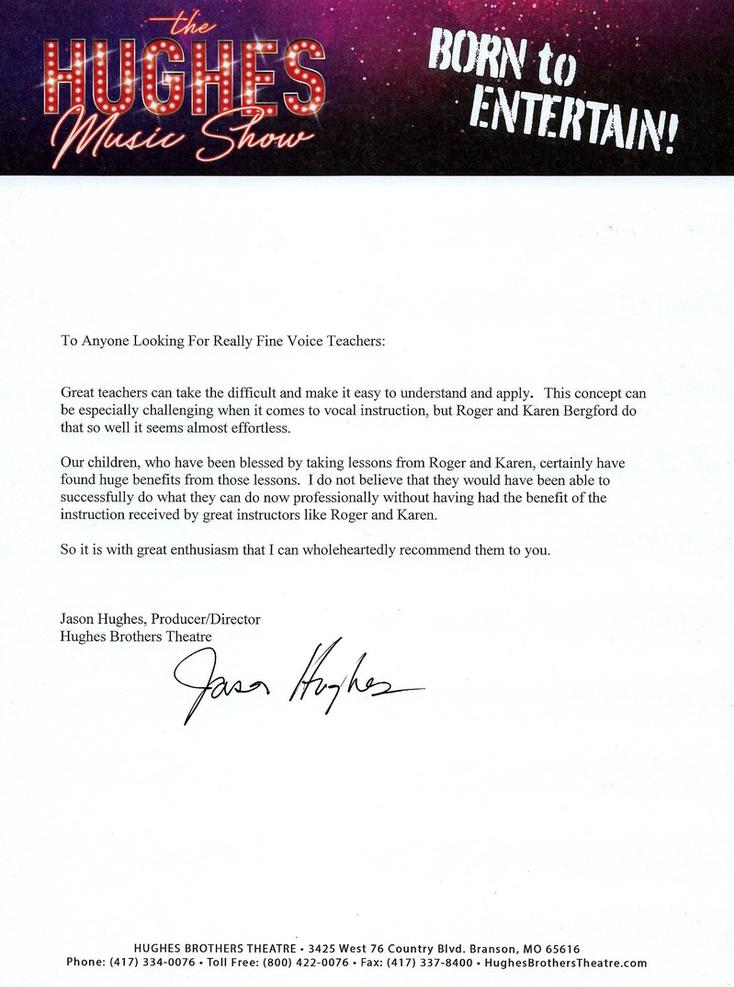 First, I want to say that it is a pleasure and an honor to write this letter.  We love Roger and Karen Bergford and feel that they are remarkable vocal teachers.  They truly love what they do, and it shows in how they approach their work.  Because of their love and commitment to me and my family, we have become lifelong friends.

Both Karen and Roger are truly gifted when it comes to vocal instruction, whether it’s singing or just simply speaking correctly.  They are phenomenal at getting the core of your voice solid, healthy, and resonating right where it should be.  This, of course, allows a student to take that training and to confidently sing in a variety of styles without injuring the voice or restricting it in any way, thus giving a lot of freedom to the voice.  I personally have benefited from their instruction, as I find that when I sing, I can feel the sound resonate up high in my head and all the way around the back and both sides.  This has truly had an impact on me professionally. 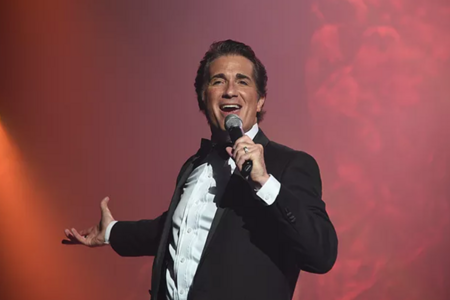 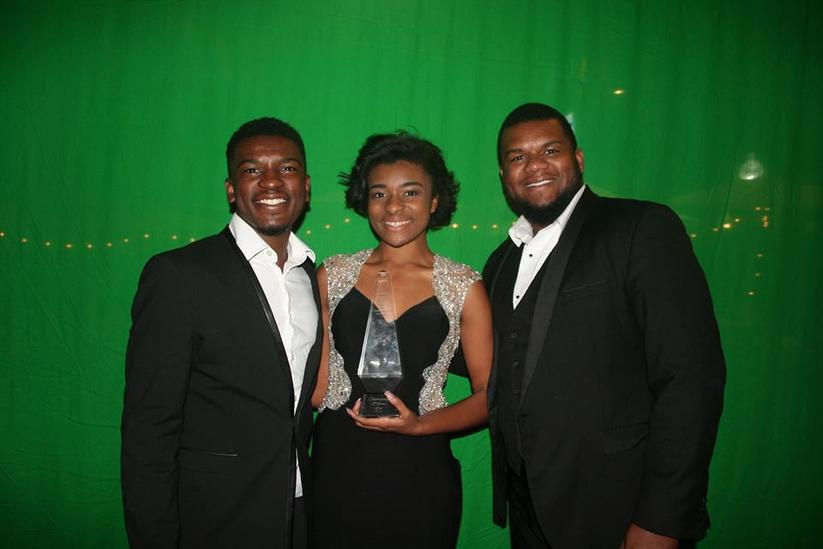 The Bergfords also work with our children, and they are amazing with them.  The kids really love Karen and Roger and look forward to their lessons.  They have a very special way of working with them that is so fun to watch.  I personally think it’s because they are able to convey how much they genuinely care about them as individuals, not just because they were hired to teach them.  Because of this, our children take the time to practice and have a real desire to do their best for them, and that translates into proficiency.  When they see their own progress, it excites them and causes them to try even harder.

You will never find more enthusiastic teachers than Karen and Roger.  They always make lessons fun, and even when working on the more technical aspects of singing that require a certain amount of repetition of isolated sections of a song, neither Roger nor Karen are ever discouraging to me or the kids.  They give a lot of encouragement while working with all of us, and because of that, both the kids and I look forward to our lessons.

What I have observed and find really fascinating about the lessons with the kids, is that the things they have learned have stuck with them.  I believe that speaks volumes as far as the effectiveness of the Bergfords’ instruction.  The way in which they teach gives the students a unique way of creating vocal and muscle memory.  This allows them to sing naturally and maintain correct vocal control even after the lessons are over.

The time spent with the Bergfords has definitely helped all of us to become more proficient as entertainers.  Depending on the season, we’ll perform up to 12 shows a week.  Not only have I seen improvement in myself, but also in our children’s vocal capabilities.  The Bergfords have had a huge impact on all of us.

If you’re wondering if you should take lessons from Roger and Karen Bergford, remember that this is an investment in yourself.  In my opinion, you will never go wrong allowing Karen and Roger to help you get all you can from your investment.